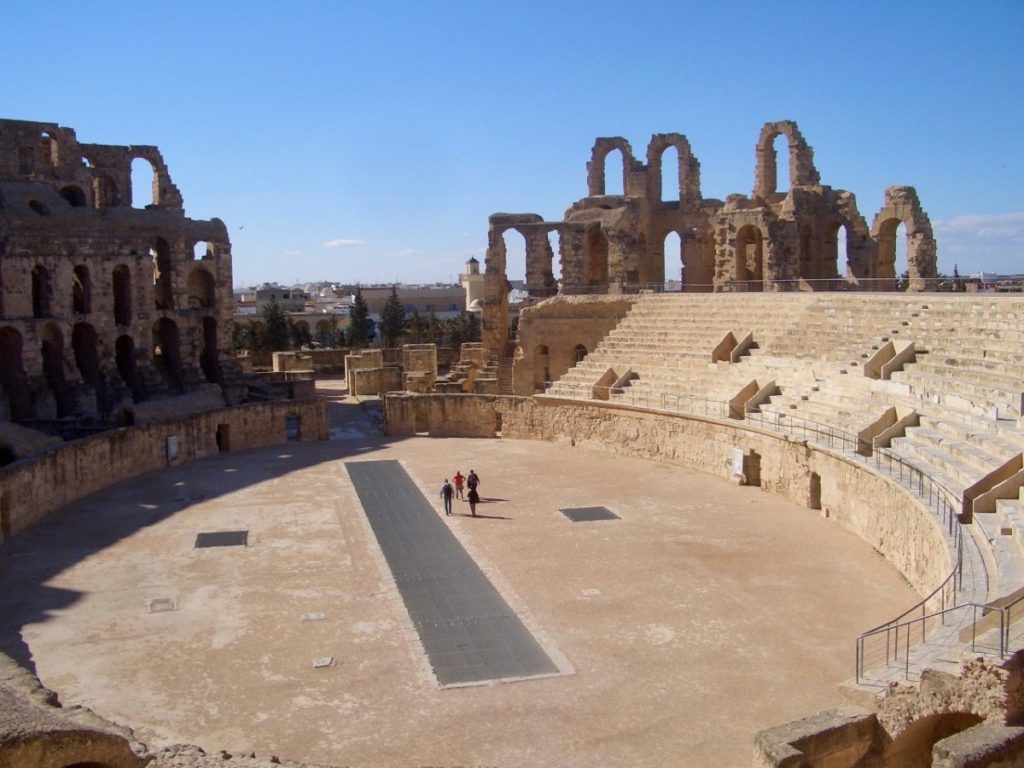 “Kairouan” sounds like the name of a planet in a galaxy far, far away. Actually, it’s an easy day trip from Tunisia’s capital city, but it feels like another world, with Tunisia treasures spanning history from Roman times to Star Wars.

From our hotel in Tunis, our driver took the highway towards Libya. The road was lined with camel-butcher stalls and makeshift petrol stands, with cans of cheap fuel that had been carted across the Libyan border. One of the world’s largest mosques is in Kairouan, Tunisia.

Our destination was the Grand Mosque, which fills up on Fridays with thousands of worshippers. Dating back to 670, the present building complex was mostly built in the 9th century. It is considered a masterpiece of Islamic architecture. 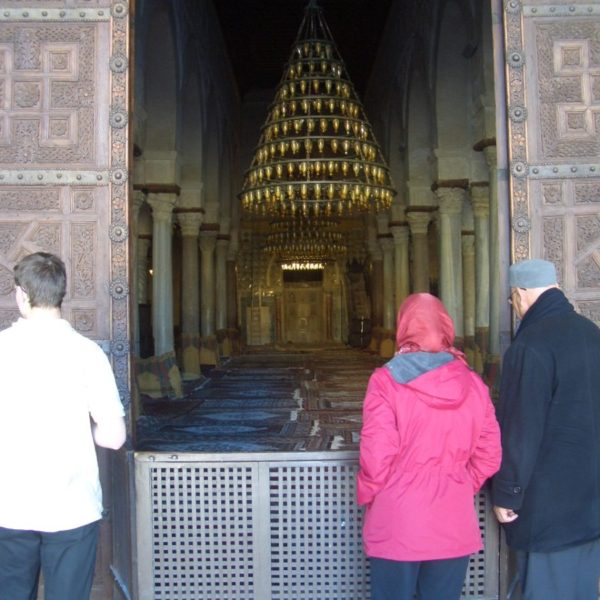 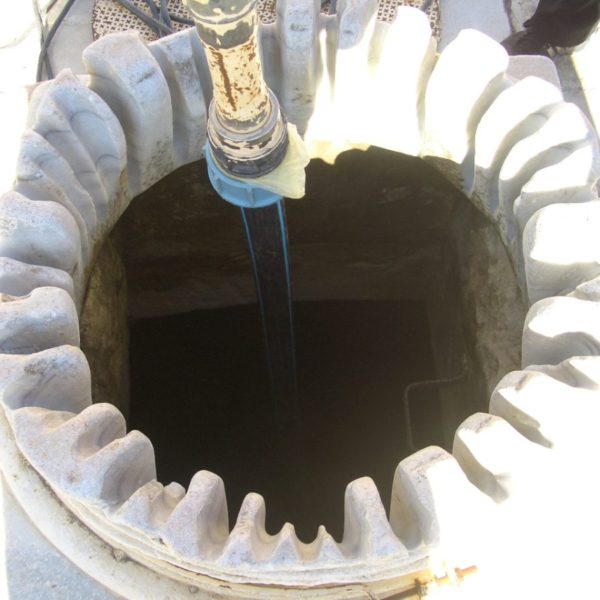 A modern pump now draws water from the ancient well in the center of the courtyard.  A number of other shrines in the town have added to Kairouan’s place in UNESCO world heritage. As in any Muslim culture, women should bring a head scarf to enter the holy sites.

In the lively market nearby, we sampled local food, shopped for souvenirs and took pictures of a camel grinding grain — more fortunate than the doomed animals we had witnessed along the highway. 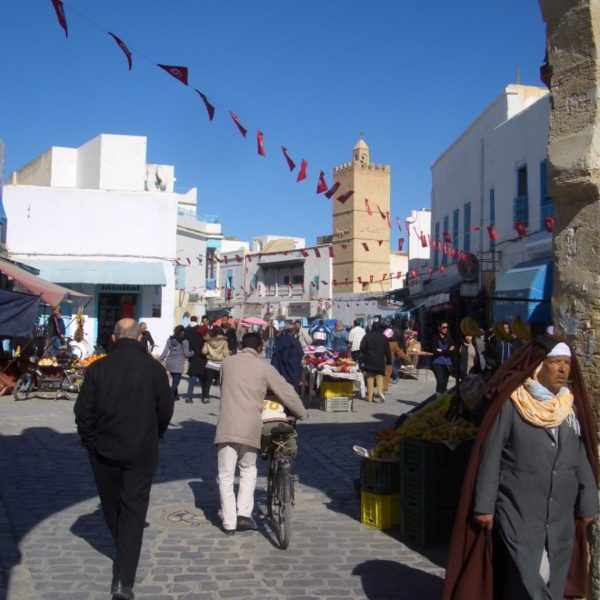 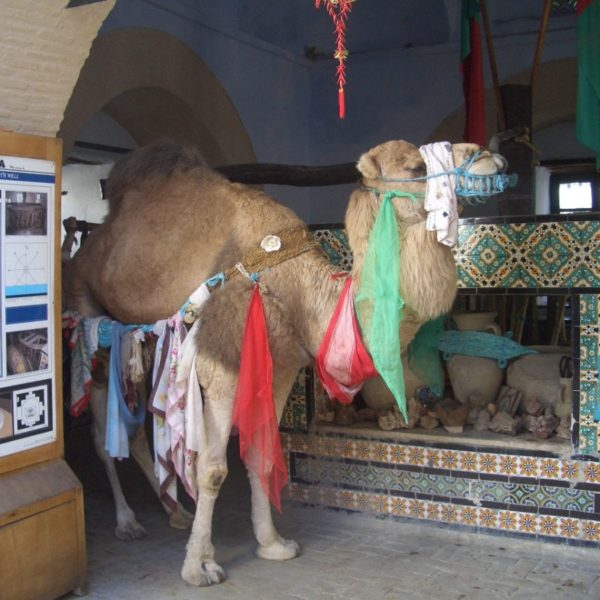 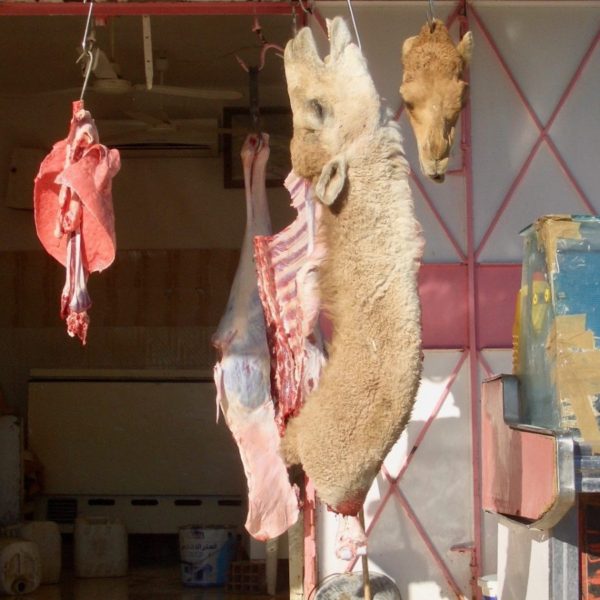 Built in the 3rd Century, this imposing amphitheater could hold 35,000 spectators for gladiator fights and chariot races. Amphitheater is the proper term, although you’ll notice a definite architectural resemblance to the Coliseum in Rome. But here, you’ll be free to wander the nooks and crannies in solitude with few barriers and few people in your path. Allow time to soak up the history in the amphitheater at El Jem, rivaling the Coliseum in Rome.

Without the intrusion of large modern-day tour groups, visitors to El Jem (sometimes spelled El Djem) have a chance to feel the history of the place. Of course, it is also possible to visit the Coliseum in Rome without the crowds, as I explain in this post. 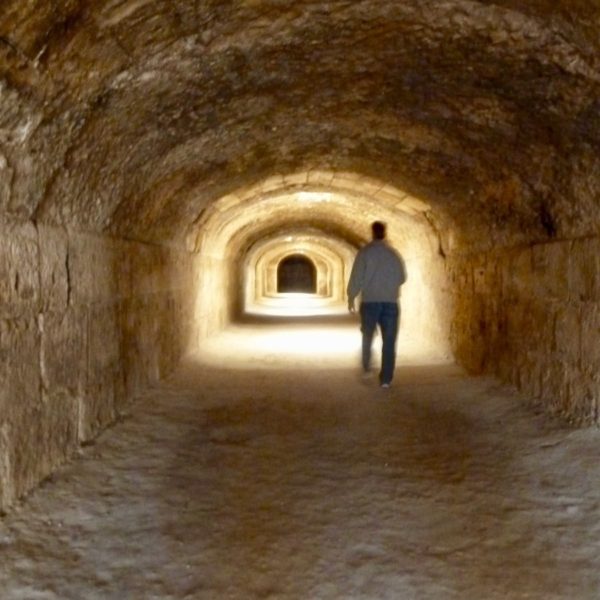 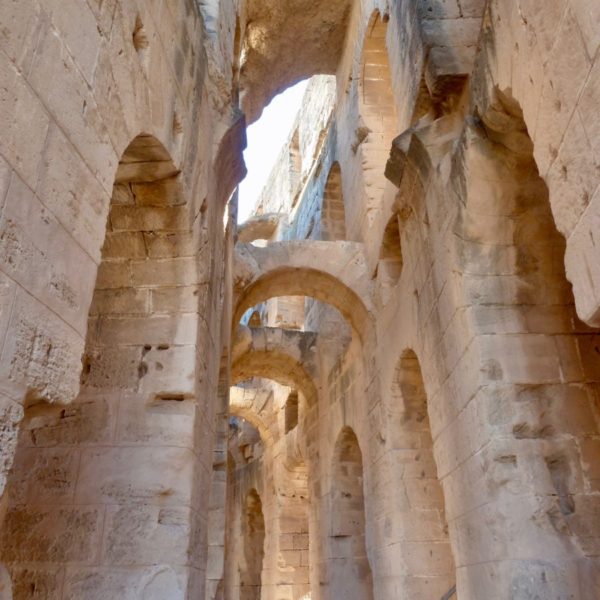 As you stroll, take time to read some of the graffiti etched into the stones by visitors over the centuries, including servicemen from a nearby base in World War II. There’s not much to see in the dusty town nearby, so we headed back to Tunis.

We opted not to visit the Star Wars filming locations on this trip, simply for lack of time. Since the downturn in tourism, the remote sites have been left to decay in the desert. A real town called Tataouine in French inspired the name of George Lucas’s fictional planet, but no scenes were filmed there. Diehard fans can check out this post to find the spread-out filming sites in the surrounding area on Google. Luke Skywalker’s home has been turned into hotel. Be aware that it’s not a luxury 5-star experience, so check out the reviews on Trip Advisor to make sure it’s what you’re looking for. 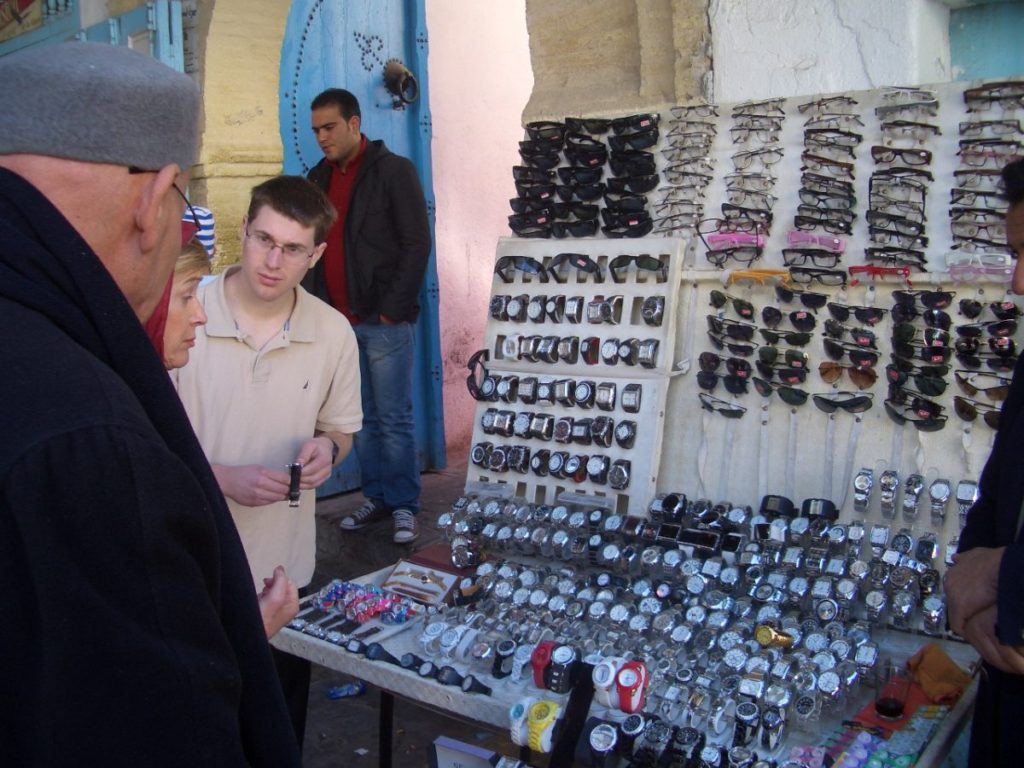 Bargaining for “designer” watches in the medina of Kairouan, Tunisia.

Getting to Kairouan and El Jem: Hiring a car with a driver who looked out for our safety allowed us to pack a lot of sightseeing into one day. It was also a very FULL day, requiring an early morning departure from Tunis to get back to the hotel by bedtime. We didn’t really stop for lunch, but sampled the local treats as we walked through the medina.

Culture and Safety: Be respectful of the holy places that you visit. While you may be there to admire the art and architecture, others have come to pray. A headscarf is required for women in mosques and shrines, but it’s also a good idea to cover your different-looking hair to avoid attracting unwanted attention in the medina. 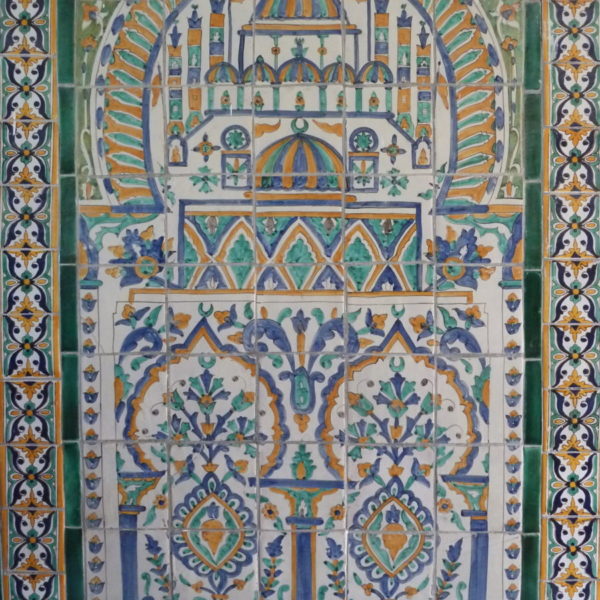 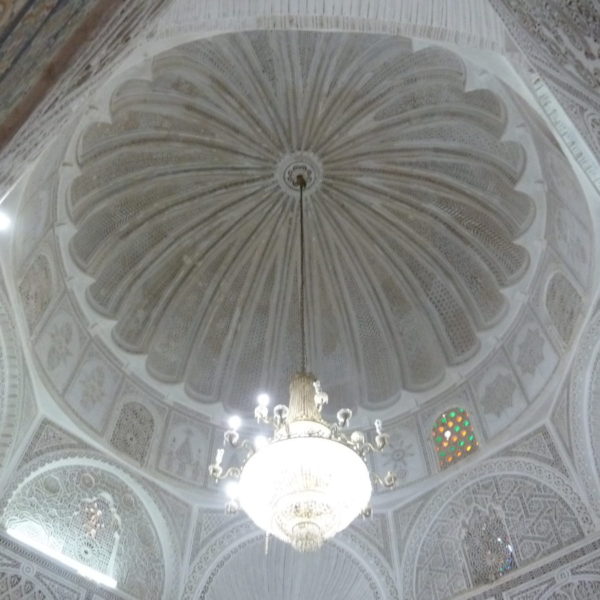 Other sights in Tunisia: Check out this post for a video of our trip, and tips for visiting Tunis and nearby Carthage. Another day trip took us to the sprawling UNESCO runs at Dougga and the underground villas at Bulla Regia. 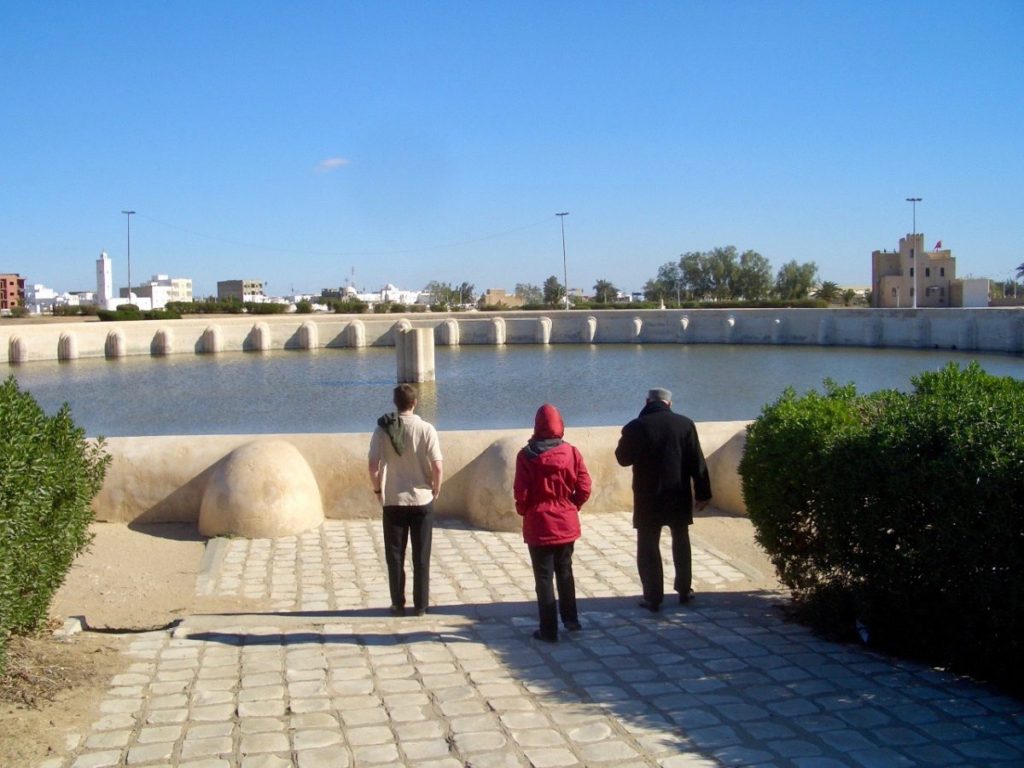 Sacred pools date back to the Aghlabite Dynasty in the 9th century. 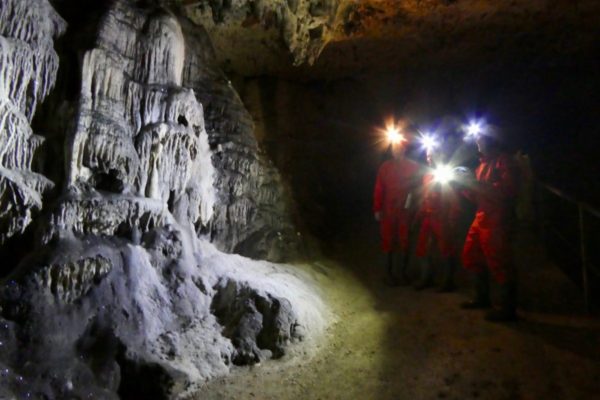 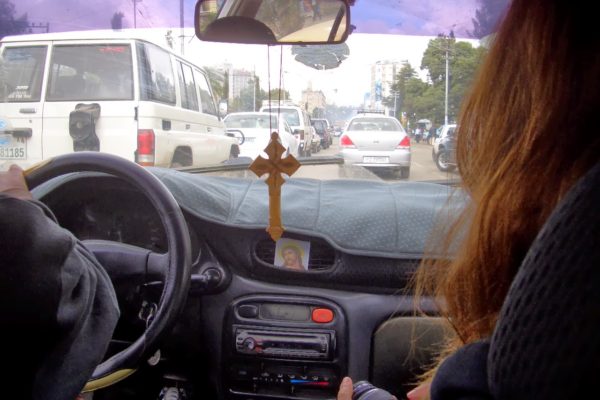 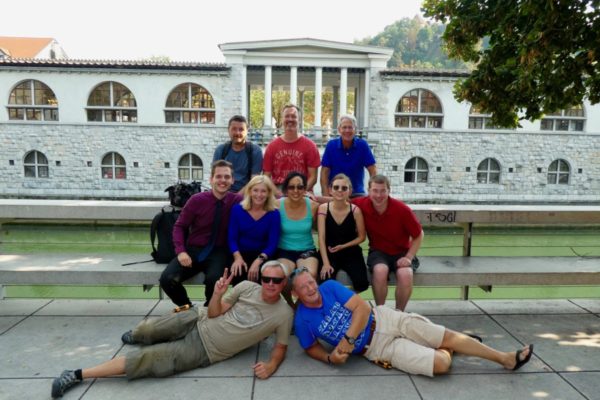