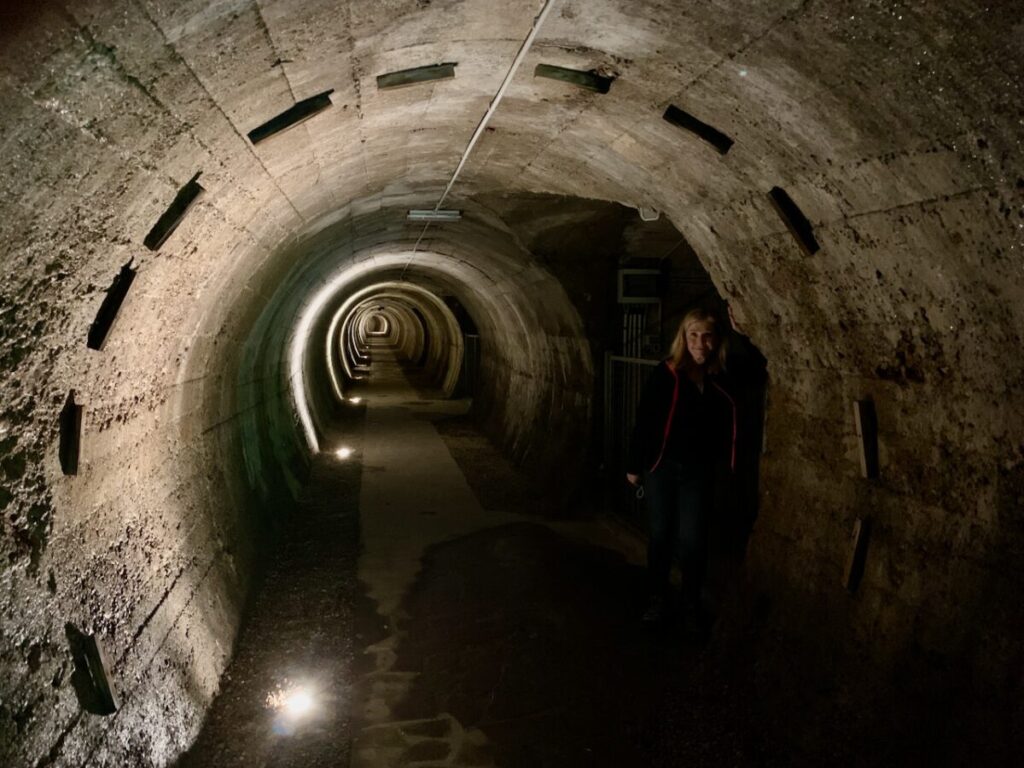 The vast World War II bomb shelter tunnels underneath the charming old town of Kranj are one of coolest historical attractions in Slovenia. But most travelers pass right by, without even knowing what they’ve missed.

The area’s history goes back nearly 7,000 years, to evidence of the first human settlers on the strategic rock carved out between two mighty rivers at the foot of the Alps. In any other country, the dramatic setting alone would be enough to attract sightseers.

But Kranj also has the misfortune of being just off the main road connecting two world-class destinations: the atmospheric old town of Ljubljana and the scenic wonders of Bled. “We have a hard time convincing visitors to stop here,” one tourism worker confided.

Here’s why you should include Kranj as a stop on your tour of Slovenia; it’s an easy day trip if you’re staying in Ljubljana or vacationing in Bled. If you’re traveling by car it might also make a good home base for exploring the region, staying among the many locals who commute to the capital city but enjoy a high quality of life and a lower cost of living in and around Kranj. Facing defeat at the end of World War II, the Nazis abandoned the bomb shelter beneath the old town of Kranj before Slovenian workers had finished completing tunnels like this one.

Slovenians suffered greatly during World War II, caught between Fascist Italy and Nazi Germany. The Germans seized the factories around Kranj to make supplies for their war machine. A Slovenian architect, Josip Slavec, was hired to build a network of tunnels that would shield the occupying troops and the local factory workforce from Allied bomb strikes. The tunnel builders were paid for their labor and even managed to divert some of the dynamite and other construction materials to the Opposition Front.

You must be on a guided tour to visit the tunnels under the old town, arranged through the Kranj Tourist Office on the main square at Glavni Trg 2 or by emailing info@visitkranj.com. Individual tickets were 3 euros for adults at the time of my visit, but check here for the current times and prices. Our English-speaking guide, Jure, led us through the old town backstreets to a stairway leading down to one of the locked tunnel entrances. 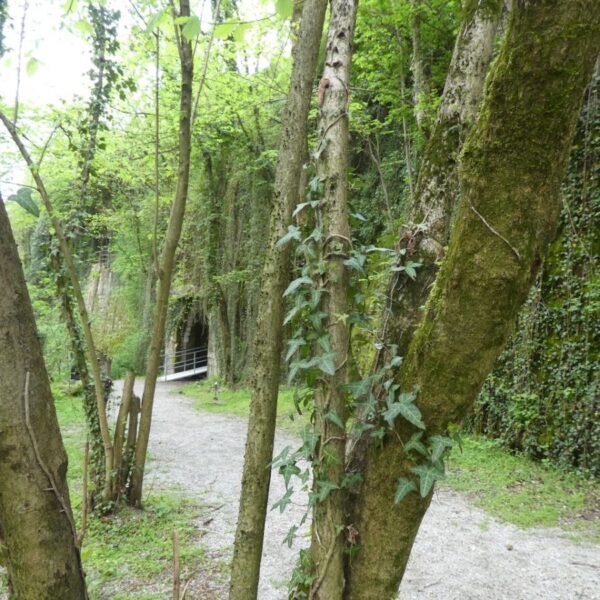 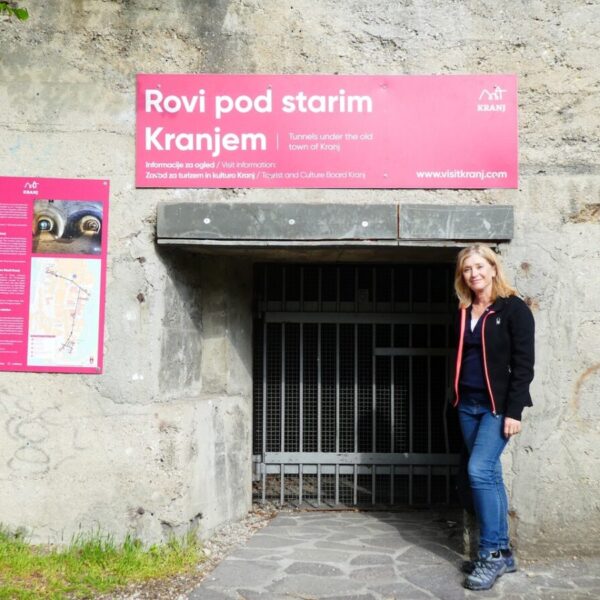 The tunnels were abandoned after the war and used for mushroom growing. It took nearly an hour to walk through some of the 1,300 meters of restored passageways that were once lined with wooden benches for men, women and children. Side chambers were used as German command bunkers, or as toilet stalls with buckets that needed to be emptied outside.

Along the way we experienced a moment of total darkness and a simulation of what it must have been like during a bombing raid. The bone-rattling roar of simulated bombers overhead was terrifying, but showed why this award-winning experience has been recognized for bringing history alive. At least one baby was born in the tunnel, who returned as a senior citizen to take the tour. Our Visit Kranj guide shines a light on 1980s graffiti and searches for cave-dwelling critters in the subterranean eco-system of the vast Nazi bomb shelter tunnels.

The chilly atmosphere is similar to the natural underground caves of Slovenia’s karst region, so we were glad to be wearing warm jackets and sturdy hiking shoes. Jure shined his flashlight on creepy cave spiders and looked for bats. Future plans call for a research center and display of the unique “baby dragons” that live in Slovenia’s cave eco-systems.

Exiting the tunnels, we climbed another stairway that led back to the southern tip of the old town. Here, traces of the oldest human settlements were discovered, and you can view a waterfall on the Kokra River gorge from a glass outlook on the site of a former defense tower in the remains of the medieval city walls. You can also walk through the canyon for a nature break in the city. 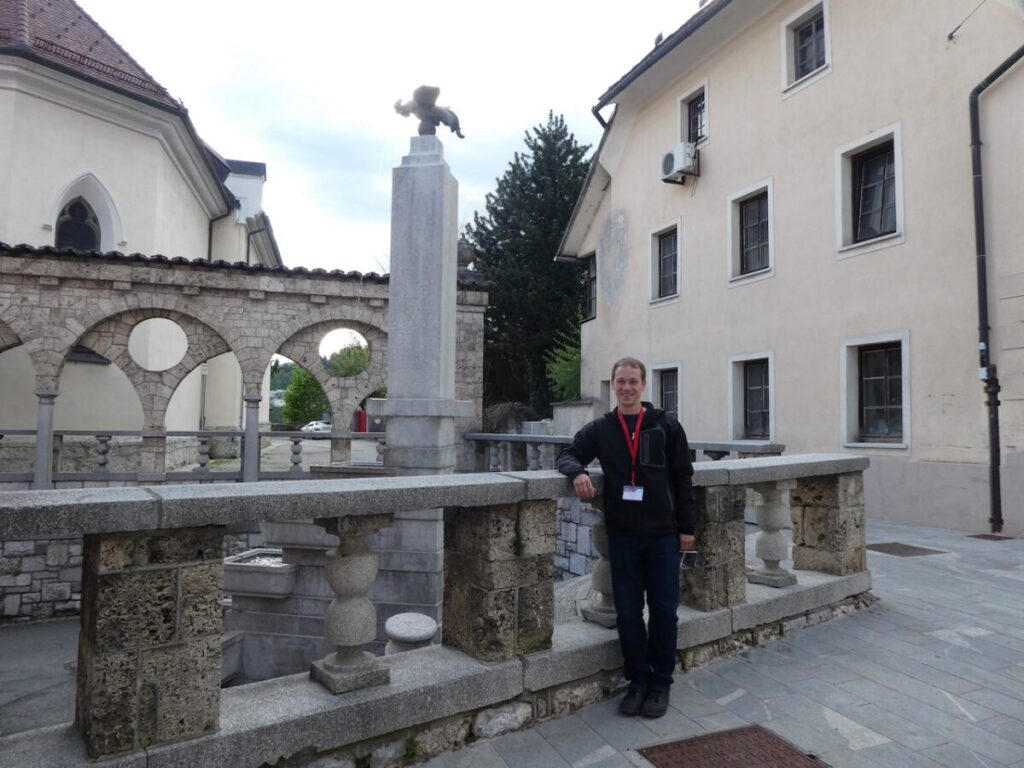 Our English-speaking guide, Jure, points out the features of the ornamental city gate in the old town of Kranj, designed by Jože Plečnik.

Prešeren and Plečnik in Kranj

Kranj takes pride in being the home of Slovenian’s national poet, Franc Prešeren. Poor and still despondent over his lost love, Julija, Preseren set up a law practice in Kranj in the years before his death. The house is a museum today, filled with original furniture. The poet’s burial place is in a memorial grove nearby. A huge statue, bigger than the one in Ljubljana’s Prešeren Square, was built to loom over the road leading into Kranj. Eventually its base was cut down and the poet now stands guard outside a theater that bears his name. 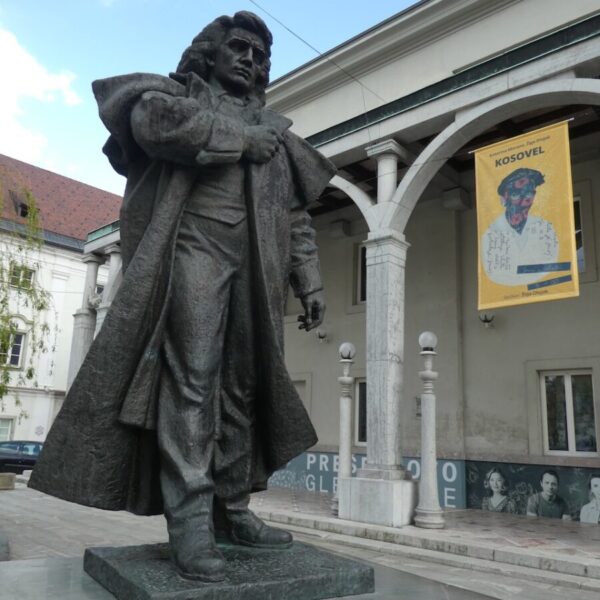 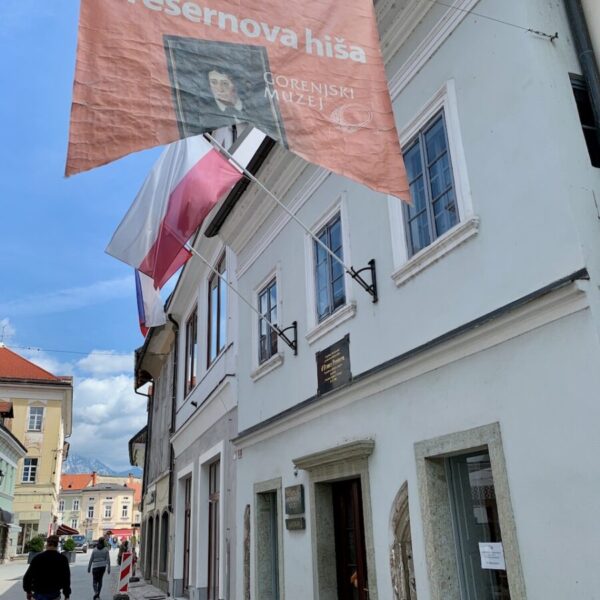 The Slovenian architect Jože Plečnik also left his mark here, designing not only the Prešeren Theater facade but an ornamental entrance to the old town. Businesses have been struggling in the pedestrian zone as car-dependent Slovenians head for the shopping malls, but the artisan shops are worth a visit for local delicacies and crafts to take home. The restored Toll House dating back to 1527, now a bar and coffee house, testifies to the historical prosperity of Kranj as a stop along the trade routes between Trieste and Vienna. 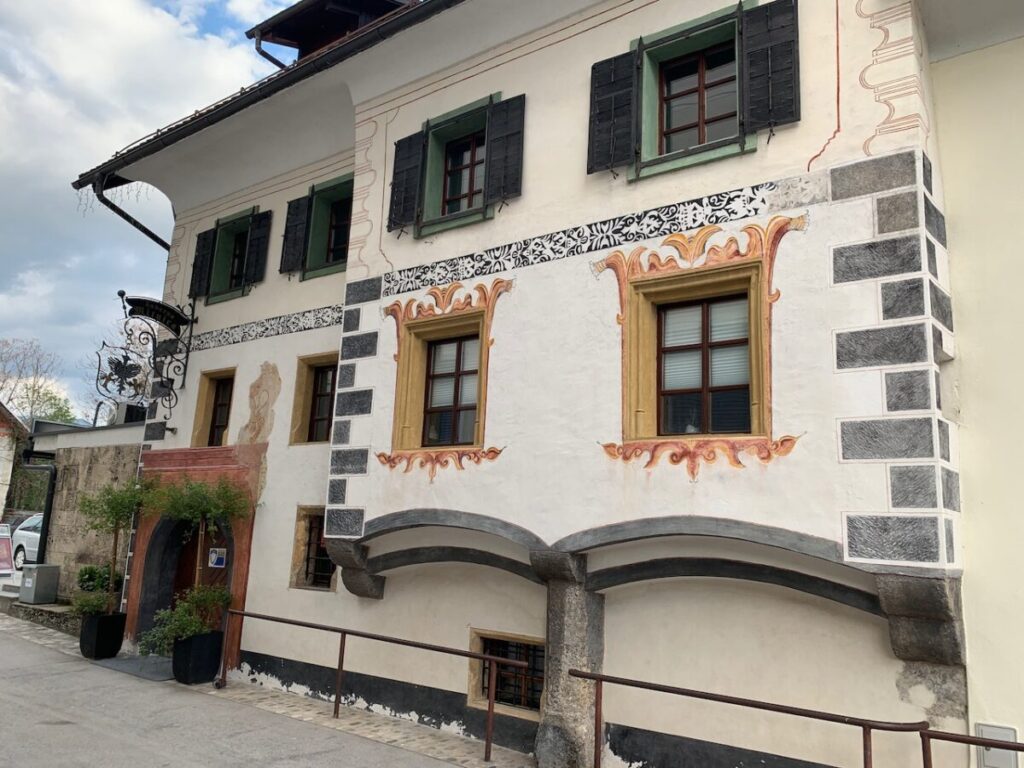 The restored Toll House in old town Kranj is evidence of the city’s importance on the trade route between Trieste and Vienna. Now restored, it houses a popular bar and coffee house.

Ossuary of Saint Cantianus Church: Where Old Bones are Buried

Back in the main square, stop at the museum in the Town Hall to buy a ticket to access the ossuary near Saint Cantianus Church. A helpful guide unlocked the stairs leading to Slovenia’s largest Slavic graveyard. It’s quite small, compared to what you might have seen in other European bone churches, but there’s lots of history here from early Slavs to the noble Egkh family of the 1400s, whose crest is in the floor. Remains dating from the plague in 1789 have also been identified. The church itself is also worth a visit for the splendid 15th century fresco on the ceiling, known as “the star of beautiful angels.” 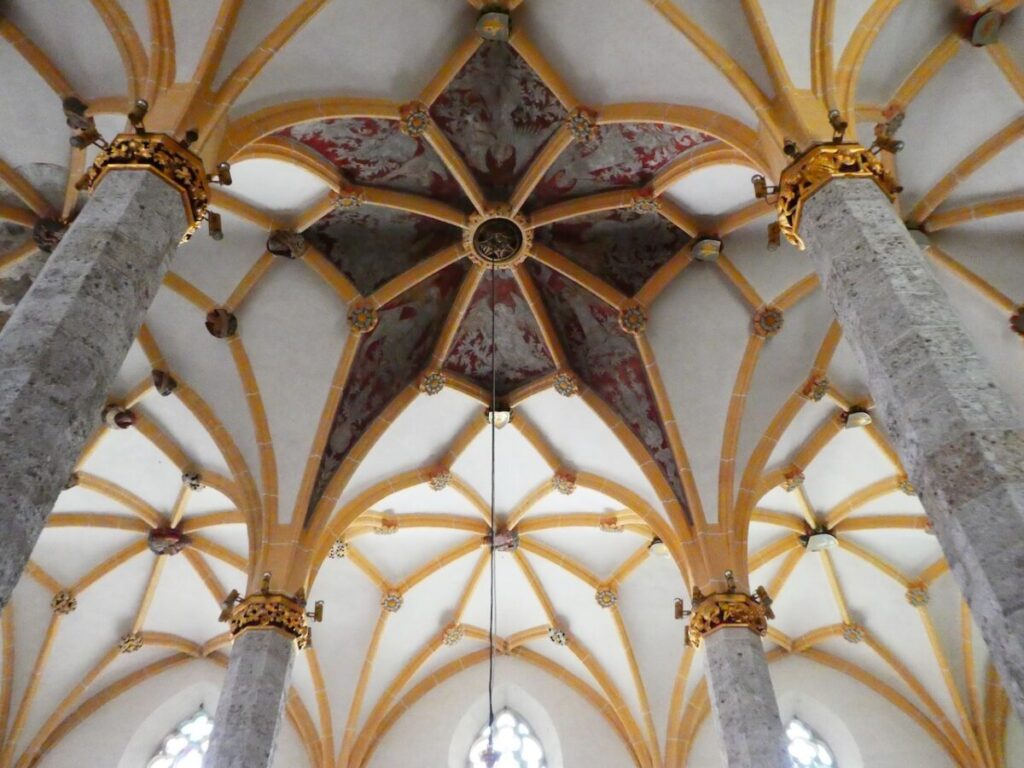 The 15th century “Star of Beautiful Angels” fresco on the ceiling of the gothic church in Kranj, Slovenia. 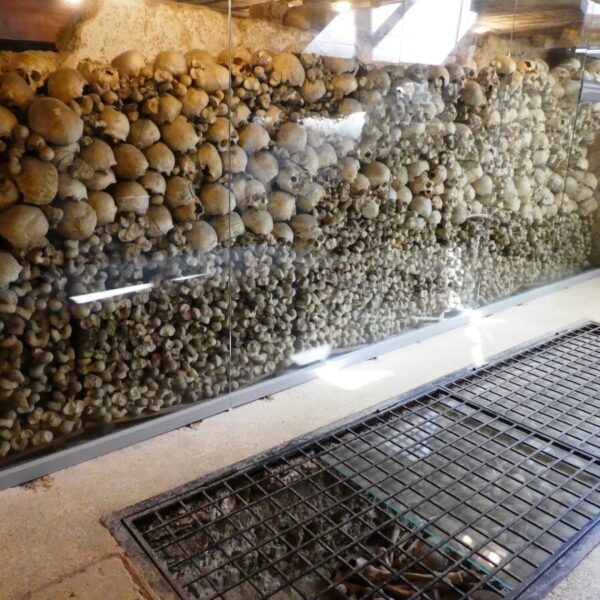 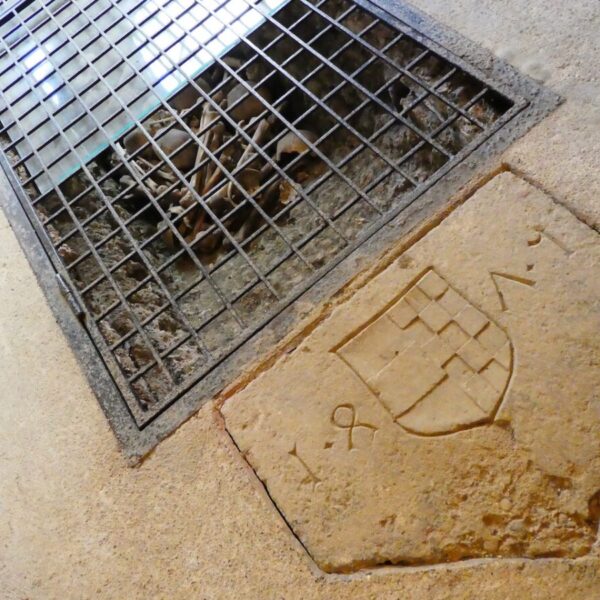 A short bus ride or a 10 minute drive out of town, the renaissance Brdo Estate is where Slovenia frequently hosts visiting dignitaries. US President George W. Bush and Russian leader Vladimir Putin came here for a summit in 2001. The surrounding park offers visitors a glimpse of Slovenia in miniature, with traditional hayracks, a symbolic beehive and a small training facility for Lipizzaner horses, bred at the stud farm in the Slovenian town of Lipica for the Viennese Riding School. 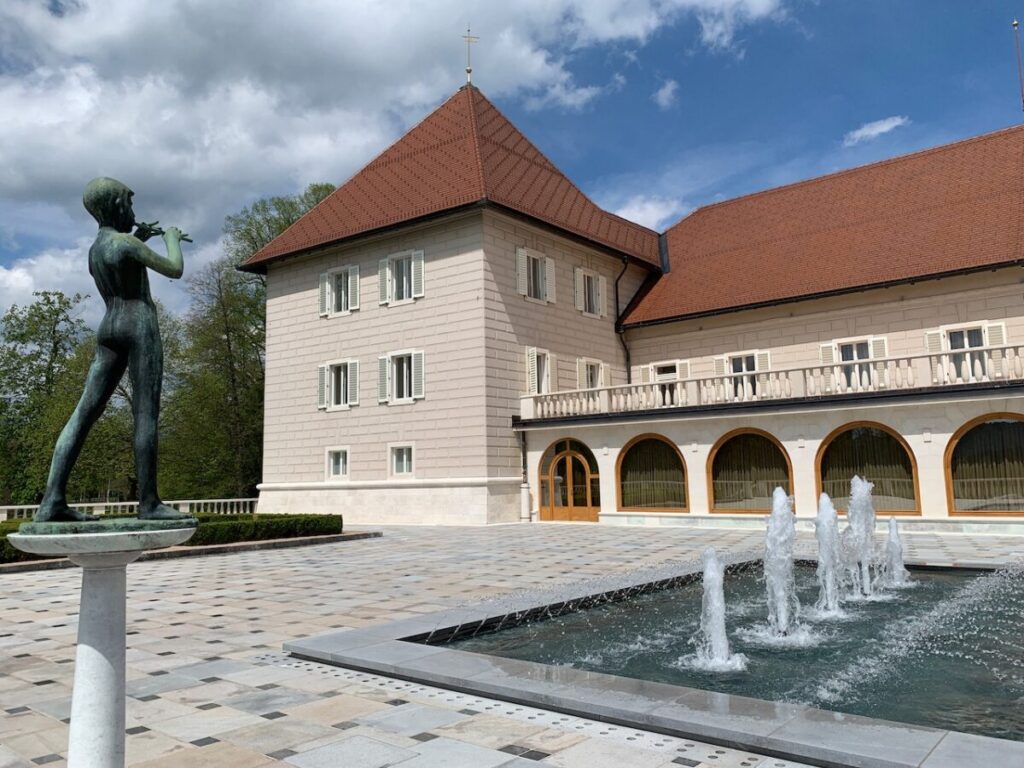 Scene of a 2001 US-Russia summit, US President George W. Bush and Russian leader Vladimir Putin are just two of many leaders visiting the Brdo Estate.

Statues of partizans and socialist workers recall the connection to Yugoslav leader Josip Broz Tito, who spent time here in the years leading up to his death. The Hotel Brdo was under renovation at the time of my 2021 visit and set to reopen in time for Slovenia’s presidency of the EU in July 2021. 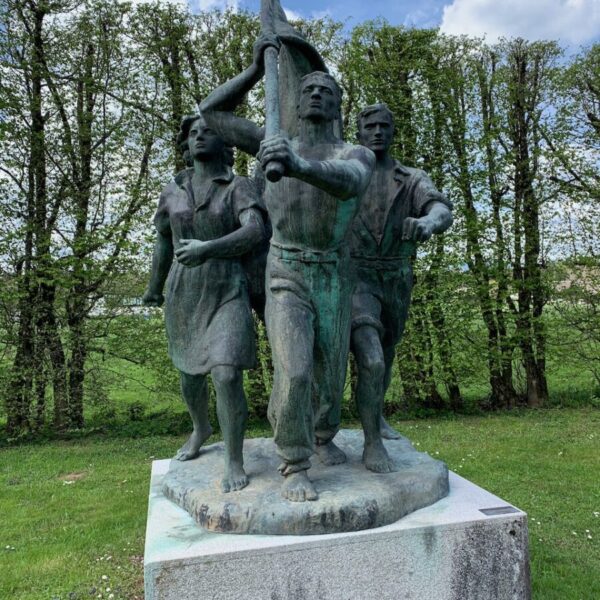 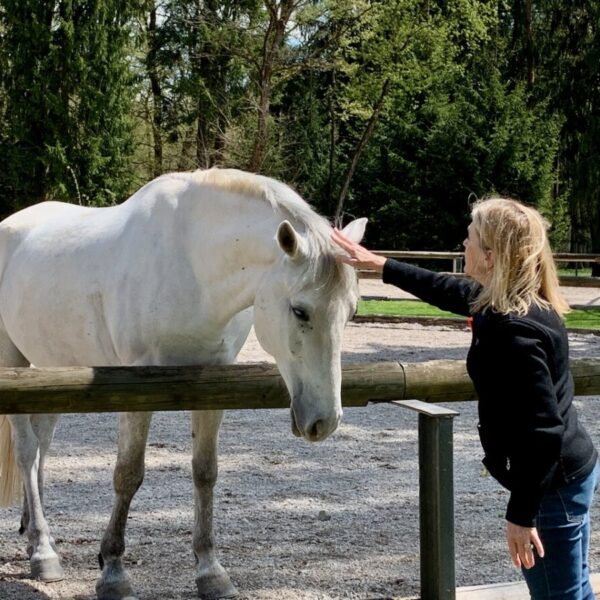 Getting to Kranj: Regular buses to the center of Kranj leave from Ljubljana’s central station or from Bled. It’s preferable to taking the train, which will drop you in a factory district on the far side of the Sava River.  Traveling by car will make it easier to reach other attractions in the area including the pretty medieval towns of Škofja Loka (10 km) and Radovljica (20 km), the capital Ljubljana (30 km) and Bled (20 km).

From Kranj you can easily reach Postojna Cave Park and Predjama Castle (75 km) or Piran on the Adriatic coast (145 km). Save money by reserving a car through Auto Europe before you leave the US. All parking lots are outside the old town pedestrian zone. 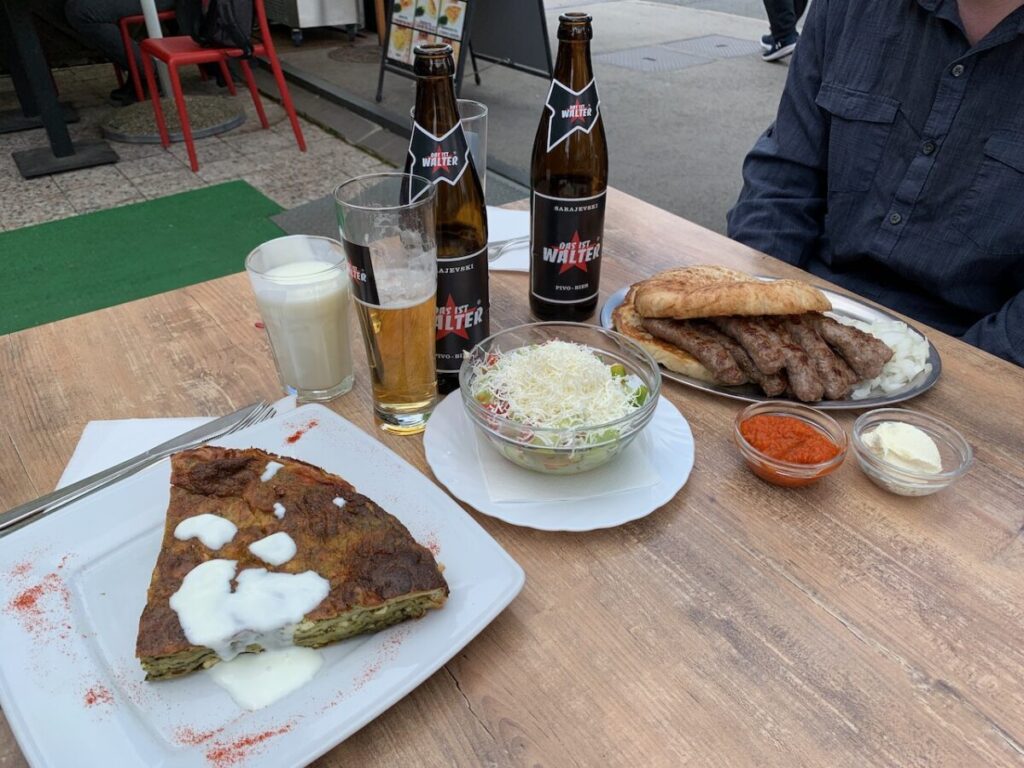 Das Ist Valter is part of a chain serving delicious Balkan food, just steps away from the pedestrian zone of Kranj. Notice the dishes of ajvar and kajmak with the tasty grilled čevapčiči.

Eating in Kranj: Trip Advisor recommends several restaurants and cafes in the old town of Kranj for sampling the local sausage, beer and štruklji dumplings. For the real comfort food of the former Yugoslavia, walk over the bridge across the Kokra River gorge to Das Ist Valter.

This funky chain offers bountiful plates of Balkan bbq at bargain prices for the quality of the beef/lamb sausages called čevapčiči. Be sure to get side orders of orange ajvar and buttery Kajmak to properly enjoy your plate of five or 10 tasty sausages. The spinach pie with creamy yogurt to pour on top provides a vegetarian (not vegan) choice.  It all goes well with the Sarajevo-style house beer. The location on the edge of the pedestrian zone is great for people watching from the outdoor patio. 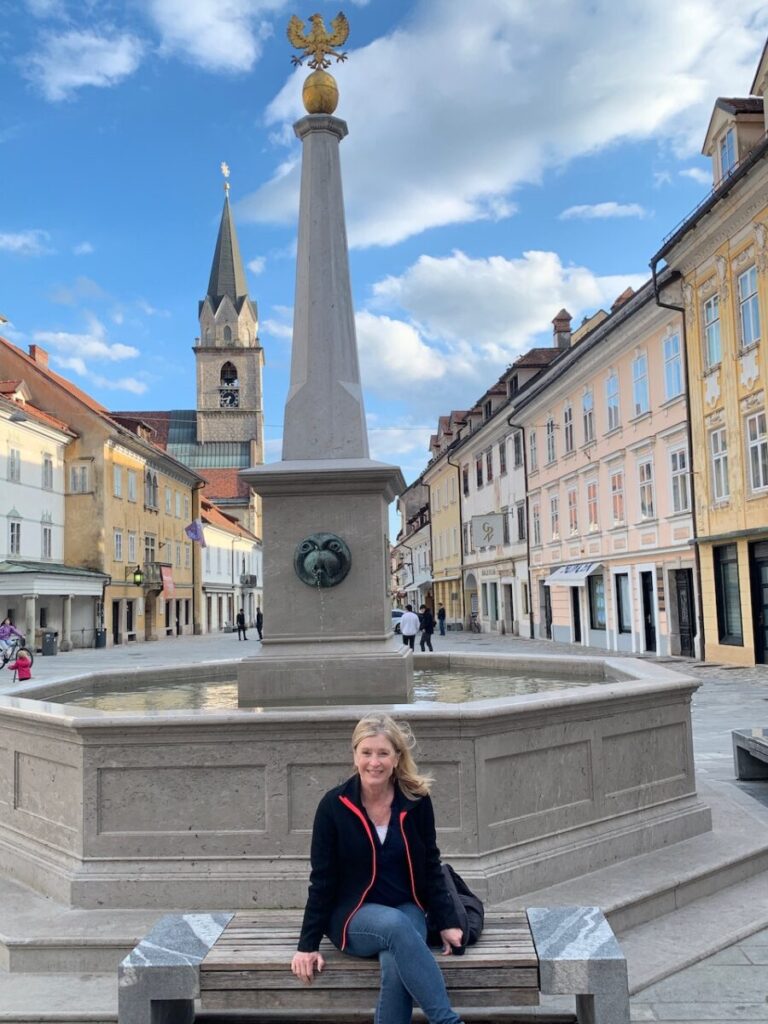 The fountain with two spouts in the main square of old town Kranj symbolizes the importance of the Sava and Korka rivers. The Germans also ordered the building of a vast cistern under the town square, for water that would be needed to put out fires in the event of a bomb strike.

Staying in Kranj: The quaint boutique Hotel Actum offers an option in the old town of Kranj with a limited number of parking spaces available.  Kranj is only 7 km from Slovenia’s international airport at Brnik (much closer than Ljubljana), making it an option for the first or last stop on your tour of Slovenia. Thanks for clicking on the Trip Advisor links in this post to make your hotel reservations in Kranj, which supports this blog with a small commission at no cost to you. Many thanks to Visit Kranj for the warm welcome. I needed more than one day to experience all that Kranj has to offer! 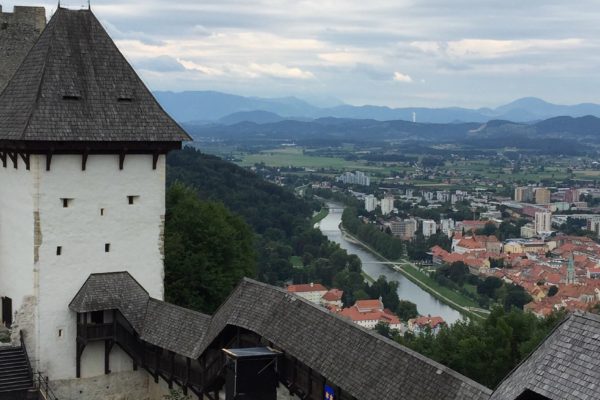 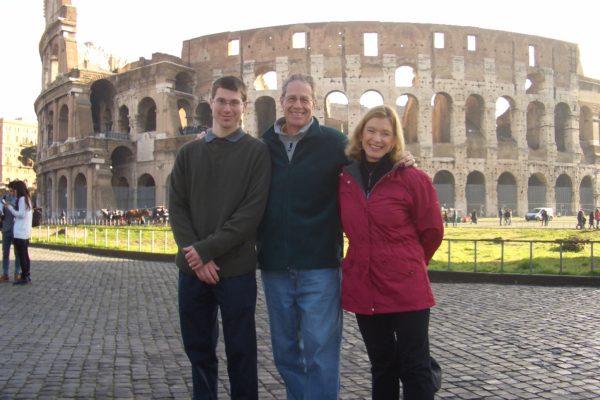 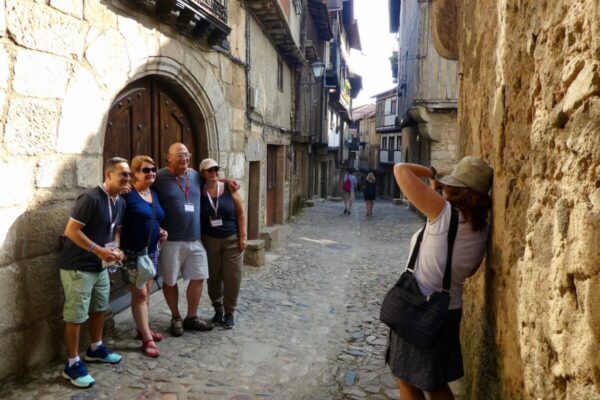