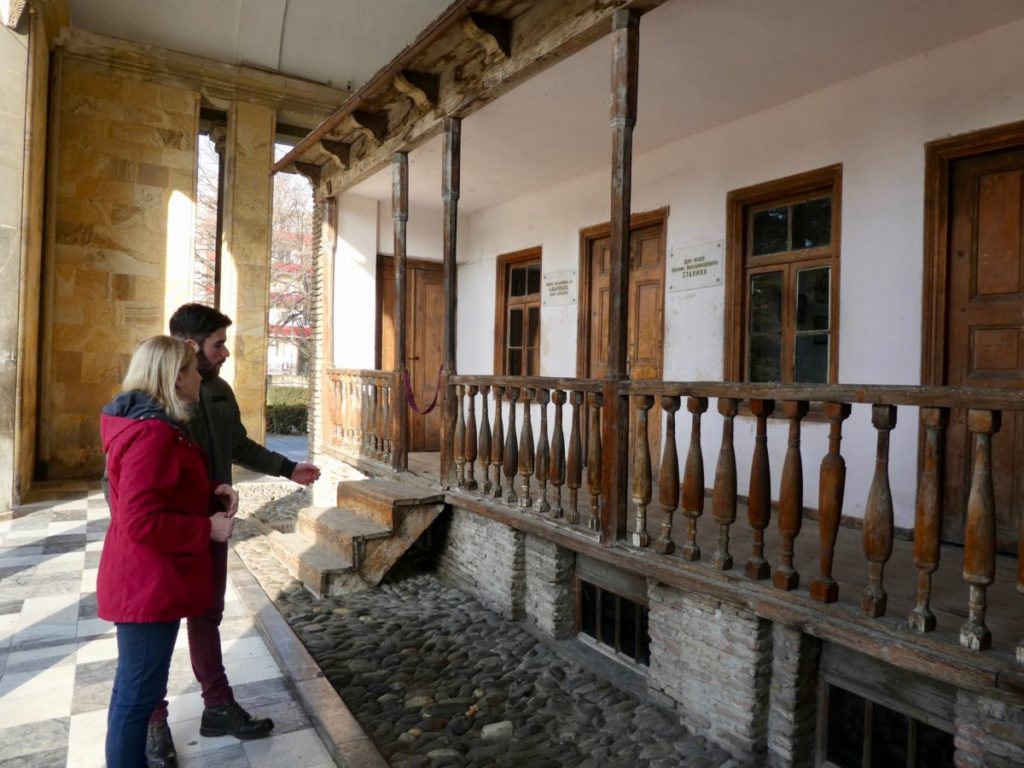 What if your town’s most famous native son grew up to become a ruthless dictator, responsible for the deaths and suffering of countless millions? You’d probably have a museum like the one in the Georgian city of Gori, where Josef Stalin was born.

Gori is about an hour’s drive (53 miles) outside of Tbilisi, the capital city of the Eastern European country of Georgia. Although he led the Soviet Union during and after World War Two, Stalin was not Russian. Ioseb Besarionis dze Jughashvili was born in 1878 but the exact date is a matter of dispute. His humble childhood home has been moved to a small square outside the Stalin Museum, where it is displayed under a roof. 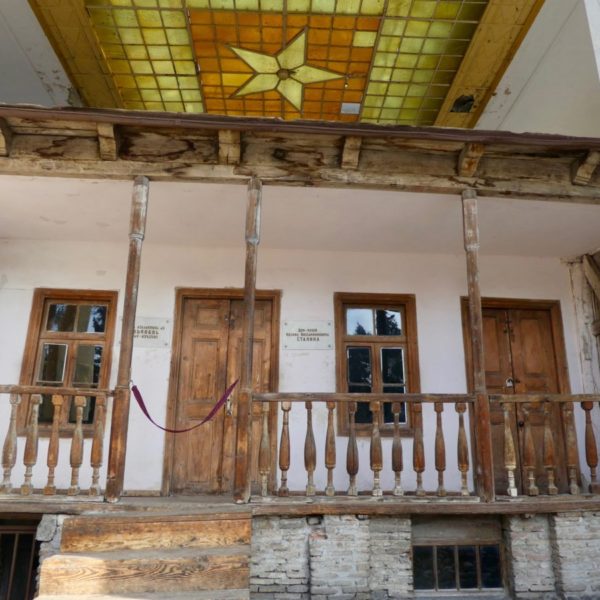 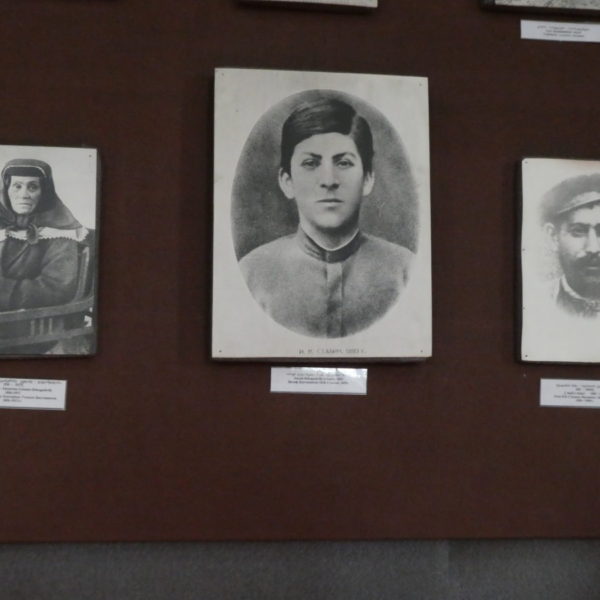 Admirers of the communist dictator sometimes gather in the square. On the winter morning of my visit, it was deserted except for a friendly stray dog. My guide, Levan, described how Stalin grew up in poverty as the son of a shoemaker. The family lived in one room next to the father’s workshop. The boy stood out in school and attracted a following after he embraced Marxism. He also suffered an injury that explains why his left arm is generally hidden in statues like the one displayed outside the museum entrance. 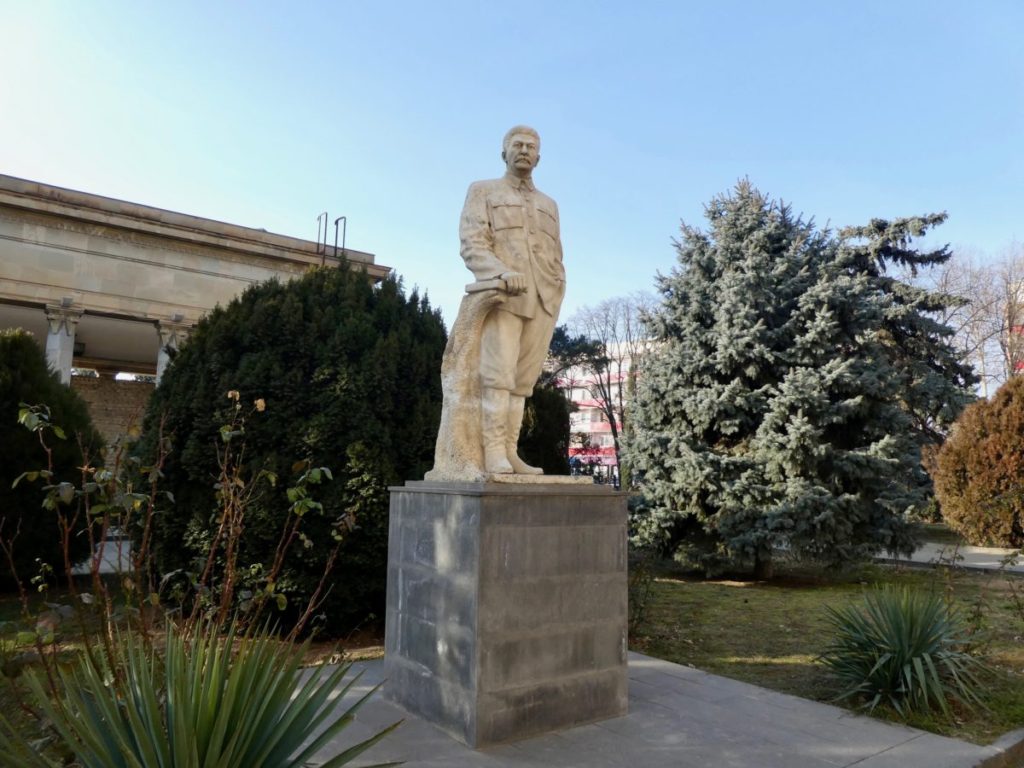 Stalin’s injured left arm was usually hidden in paintings and statues, like this one outside the museum.

Inside the Stalin Museum

Another Stalin statue presides over the grand staircase that leads to the dimly lit, chilly rooms filled with exhibits on various stages of his life. We waited for an English-speaking guide to walk us through it. Beginning with a youthful portrait, you’ll end up in a replica of Stalin’s office in the Kremlin.  Under Stalin, the Soviet Union rose to become a world power. His totalitarian tactics, however, have been widely condemned for mass repression, ethnic cleansing, deportations, executions and famines that killed millions. 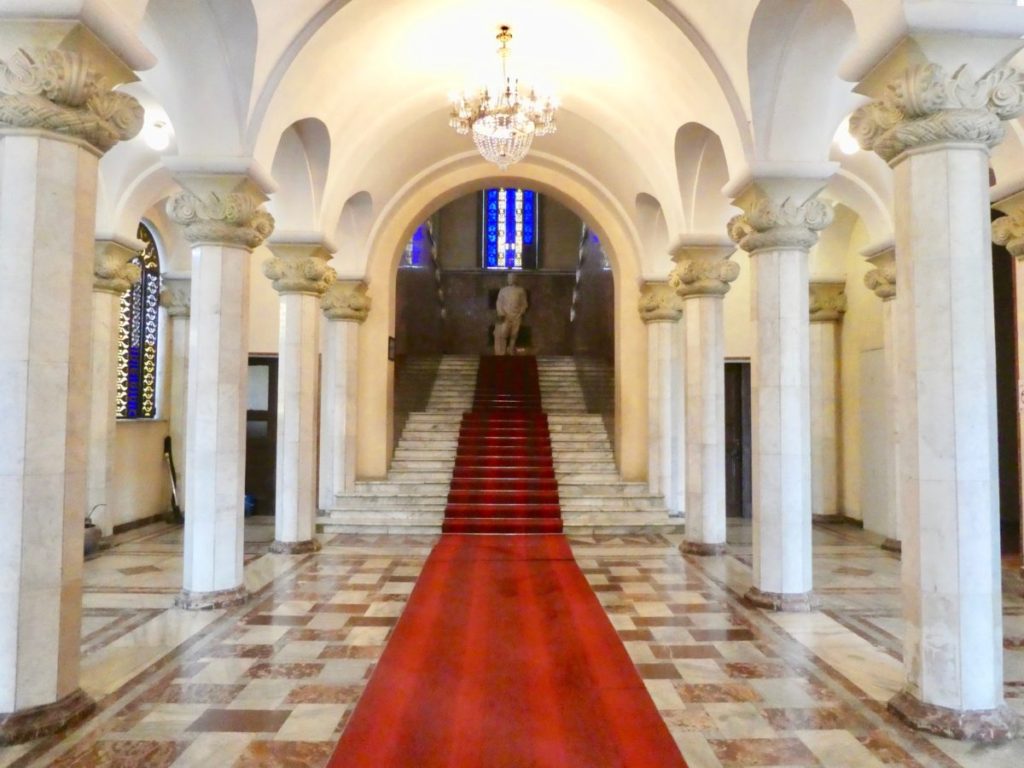 A grand staircase leads to a biased collection of artifacts that was assembled before the fall of the Soviet Union.

The biased collection of Stalin’s memorabilia was put together before Georgia gained independence in 1991 and has been denounced as an attempt to legitimize the deeds of a bloody regime through Soviet propaganda. 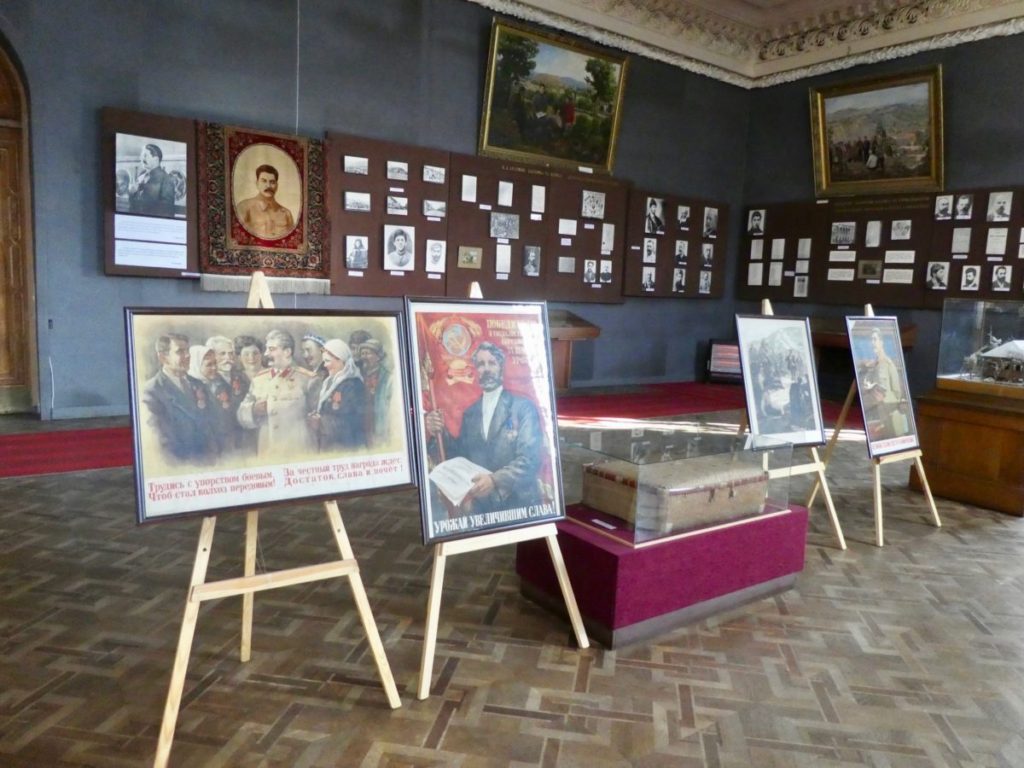 A biased collection of posters, paintings and photographs shows Stalin’s rise to power.

Although the photographs, paintings and documents are a one-sided portrayal of Stalin’s rise to power, the museum guide made an effort to balance the presentation with descriptions of the suffering endured by the Georgian people under Soviet domination. There has been talk of updating the museum, but lacking the funds they do the best they can with what’s there. 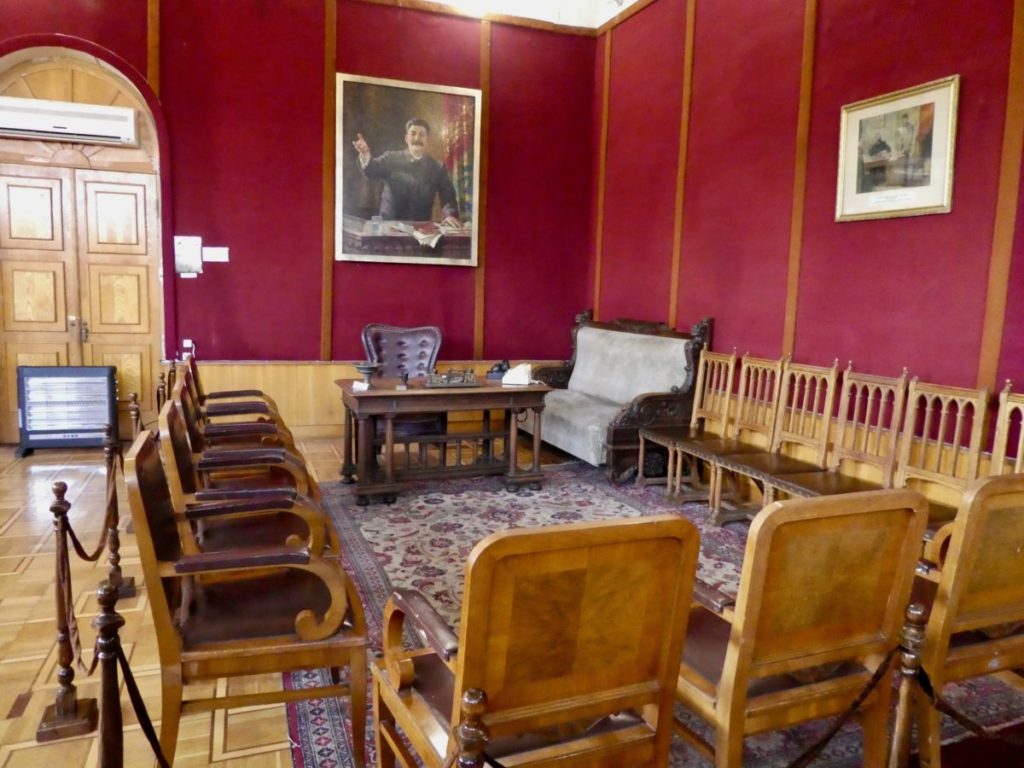 A replica of Stalin’s office in the Kremlin is one of the museum’s highlights.

The final stop on our tour was a look inside the armor-plated, private railroad car that transported Stalin to the World War II peace conferences at Yalta and Tehran. The interior is anything but luxurious and has the feel of a rolling military barracks for the communist leader and his closest advisors. 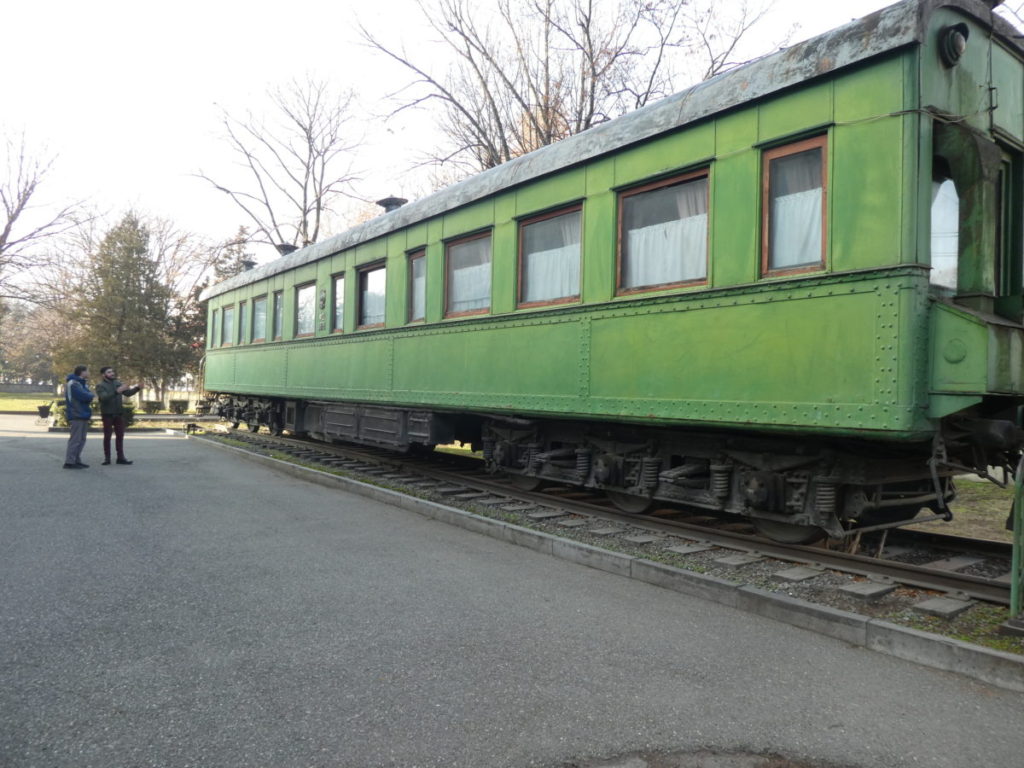 The armored railcar that transported Stalin and his closest aides to WWII peace conferences.

Stalin’s image was largely purged from the Soviet Union under his eventual successor, Nikita Khrushchev. This time-capsule museum has tote bags, coffee cups and other souvenir items for sale in a small gift shop, but you may prefer to leave with only your thoughts about Stalin’s place in history. 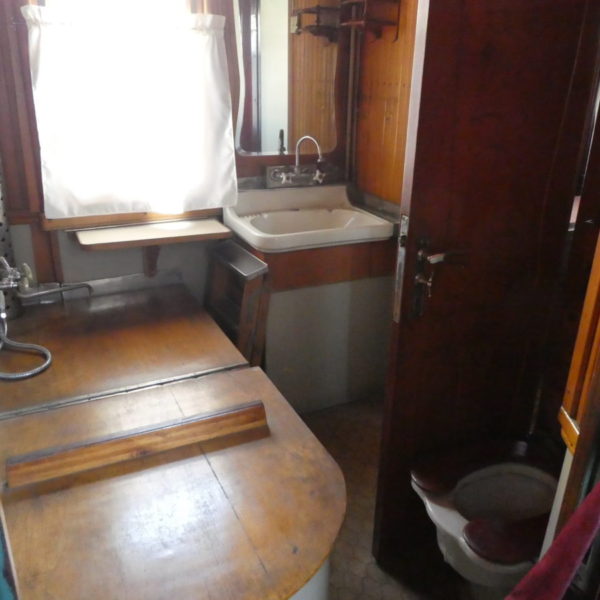 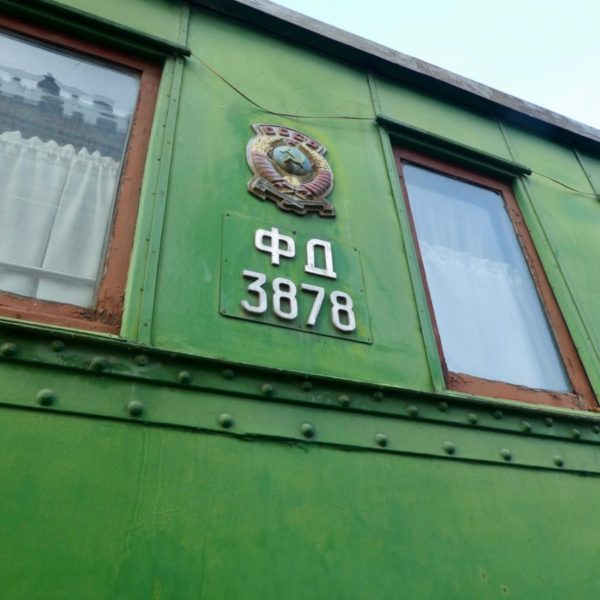 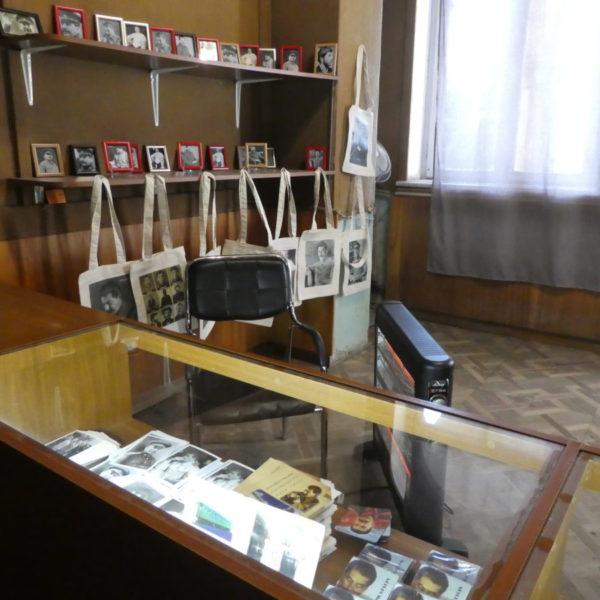 Getting here: We came on a day trip from Tbilisi with a private guide who arranged for us to have a tour of the museum in English. That was essential because the exhibits inside are almost all in the Georgian language and some Russian. Contact Discover Georgia with Levan to book your custom tour and transportation. Our museum admission was included in the tour price. 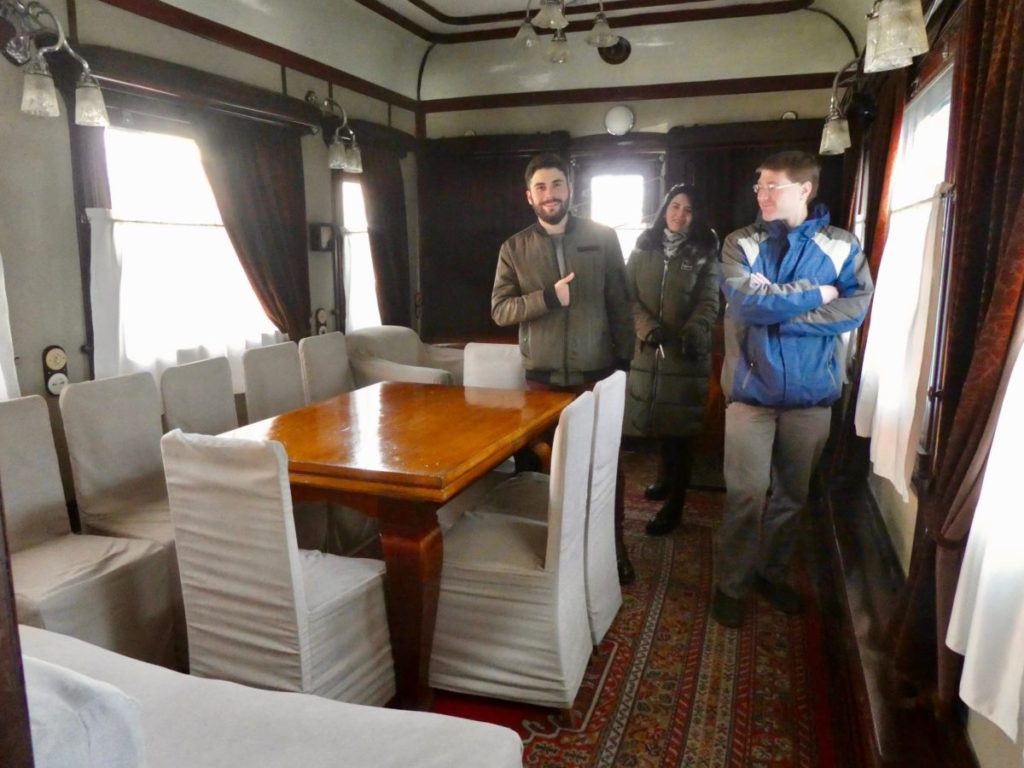 Our tour guide, Levan, strikes a pose inside Stalin’s private rail car, with our museum guide and my son Andrew, who references Stalin in some of his historical adventure stories.

Staying in Gori: There’s a choice of basic hotels and guesthouses if you decide to stay overnight to explore the Gori fortress, Orthodox Christian religious sites and the ancient Uplistsiche Cave Town nearby.

More of Stalin’s legacy: Our day trip moved on to Chiatura, the gritty industrial town where Stalin hid out as a young Bolshevik. Shortly before his death, he ordered the building of a cable car system to transport weary miners to and from work. Read more in this post on my visit to the “flying coffins,” still operating today. 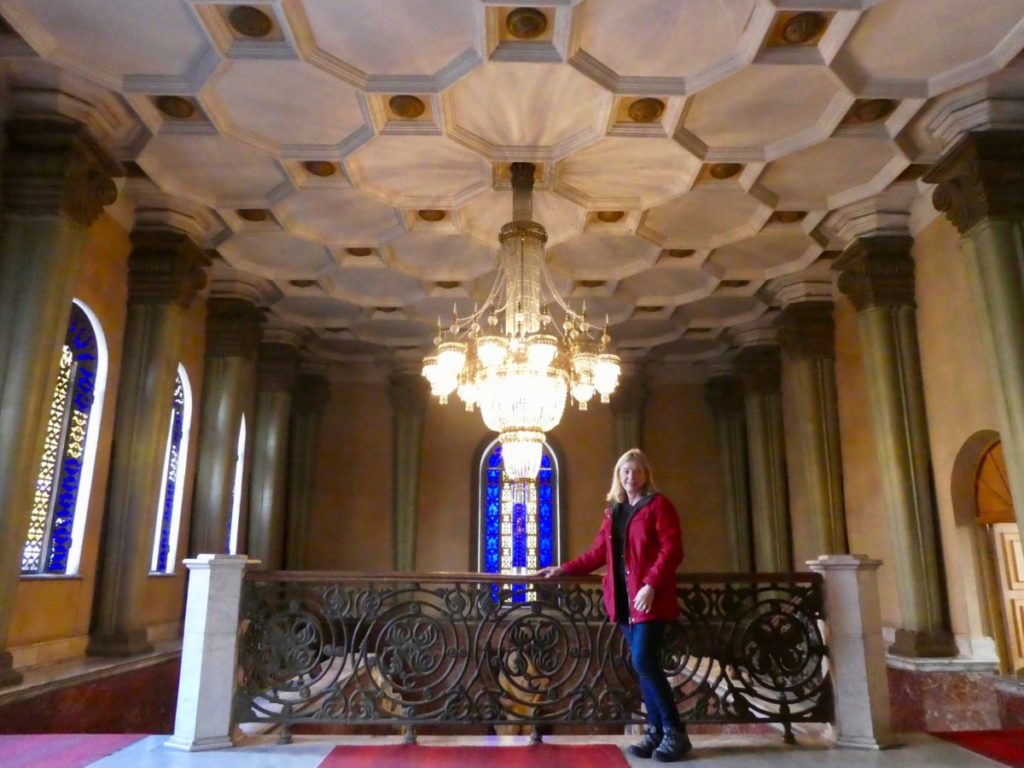 The Stalin museum in Gori, Georgia is a must-do for history buffs interested in a time-capsule version of the Soviet Union’s rise to power.

Want more practical tips for travel off the beaten track with the kindness of strangers? Like @strangersinthelivingroom on Facebook, and sign up for the occasional email when there is a new post here on the blog. You can follow Terry Anzur on Instagram,Twitter and Pinterest. I’m in the top 1% of Trip Advisor, and you can read all of my reviews at @strangersblog on the Trip Advisor feed. Thanks for clicking on the Trip Advisor links in this post to book your hotel; you’ll support my blog at no additional cost to you. 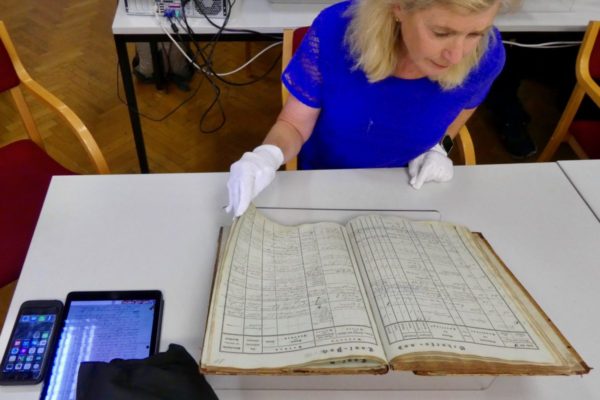 How to Search for your Ancestors in Slovenia 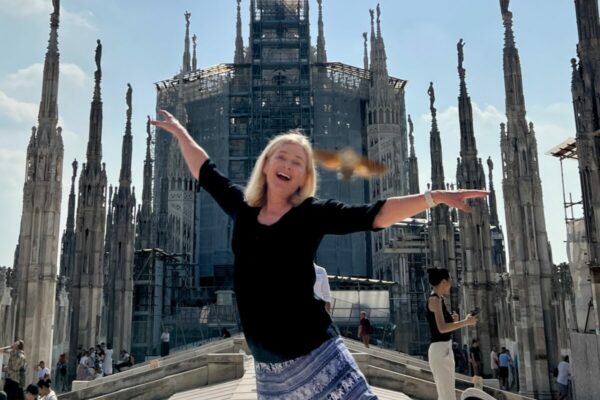 Top Sights in Milan: DaVinci’s Last Supper and the Duomo 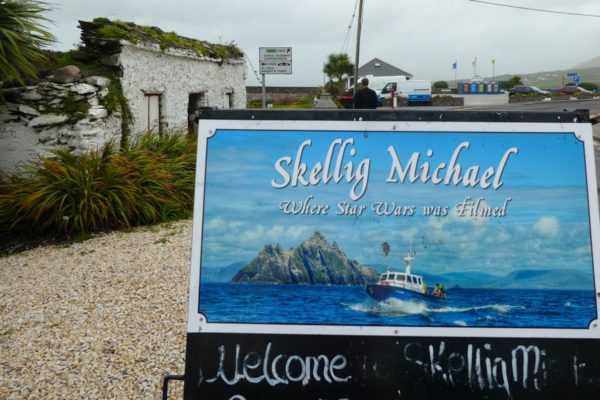